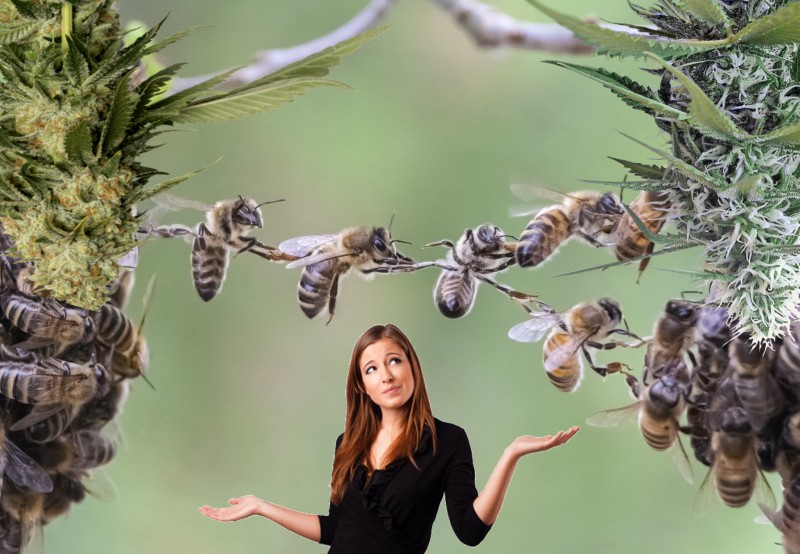 Cross-pollination of cannabis plants occurs when pollen from male cannabis plants is driven by wind or any medium to female marijuana plants. The product of this move by the pollen is that the female cannabis plants direct energy into producing seeds. By doing this, the plants do not apply as much energy to providing quality cannabinoids content. When the cannabis plant is full of seeds, there is a reduction in usable volume and overall quality of the plant. The plants cannot be sold in wholesale or retail and will have to be sold for extraction. This tends to bring about huge financial losses which is the major worry of many farmers.

This issue of cross-pollination is why considerable distance is set between hemp farmlands and marijuana growers. Pollen can travel as far as 20,000 miles which mean the absence of considerable distance puts marijuana farmers at risk. This is why the move by the Governor of Washington Jay Inslee around cannabis and hemp poses a huge issue. The Governor approved Senate Bill 5276 that opens up the state for hemp production and also removing the 4-mile buffer between hemp farms and marijuana growers.

The removal of this distance buffer between hemp farms and cannabis growers helps to improve the chance of cross-pollination between hemp and marijuana. The major losers of these tend to be outdoor marijuana cultivators when their plants are cross-pollinated by pollen from male plants. Robert Morf, the owner of Cheshire Creek is an outdoor marijuana cultivator in Waterville, Washington who has been on the receiving end of this recently. He made a loss of over $40,000 when his marijuana farm was cross-pollinated by pollen from hemp in a nearby farm.

Robert Morf is only one of the numerous cannabis growers who have been on the receiving end of such losses. They run the risk of having unmarketable plants which later results in losses of thousands of dollars. If this issue is not solved, the impact on cannabis cultivation and the industry at large can be devastating. A cannabis grower likewise loses 1% of the total cannabinoid content if a cannabis field is cross-pollinated.

How to solve the problem

Cross-pollination is not only a problem for the marijuana farmers but also the hemp farmers as well. Both parties are bound to suffer losses which is why it is important to take the right steps to curtail the issue.

Distance between the farms

With the expansion of hemp production nationwide, it is important that adequate distance is placed between hemp farms and marijuana farms to avoid cross-pollination. The removal of this distance buffer by the Governor of Washington affects this which is why many farmers are worried.  Considerable distance between the farms based on the distance that can be covered by pollen driven by pollen helps to reduce risk.

Marijuana growers should use seeds from reputable providers

The goal of a marijuana grower is to have female cannabis plants and no trace of male cannabis plants. This is why it is important that the seeds to be used for the growing process are from trusted vendors. By using seeds from trusted vendors, marijuana growers reduce the risk of cross-pollination. They also limit the kind of vendors they have to deal with. Carefully sourcing seeds can be the bridge between financial loss and quality yield for a cannabis grower.

Hemp growers should use clones

The number of acres of hemp farms available has seen a rise of over 500 percent in two years. 2018 saw over 11,574 acres of hemp available but that increased to 51,313 acres in 2019. The growth of these hemp farms has therefore made cross-pollination an issue for over 8% of marijuana growers in a state like Oregon. This is why the advice of growing hemp from clones helps to remove male plants. Though planting from clones increases the chance of mutation, it also reduces the risk of cross-pollination. By growing from clones, hemp growers do not have to deal with vendors selling non-feminized seeds.

Check the plants for hemming

Hemming is a phenomenon where a cannabis plant has both male and female cannabis flowers. It is important for cannabis growers to check their plants regularly for hemming. Regular checking also ensures that the growers vet the growing process to be sure that no male plants have grown.

The United States Department of Agriculture has also acknowledged this issue and is making giant strides to address it. The department awarded $500,000 to Virginia Tech Research to research on pollen travel. The research team hopes to use drones to track the movement of pollen. The data from this tracking will be useful for regulatory bodies to guide the distance between hemp and marijuana growers. This move by the USDA is bound to be a blessing to both the hemp growers and the cannabis cultivators.

Despite the fact that the cannabis and hemp industries have similarities, they also have major differences. Cross-pollination brings out one of those differences which is why it is an issue that must be addressed. If properly addressed and modulated, hemp growers and cannabis cultivators can both grow under the right conditions. However, if it is not properly addressed, thousands of dollars are bound to be lost by both parties. This will surely be detrimental seeing as it is easily avoidable.