Your Guide to the USDA’s Final Rule on Hemp

From sampling to THC testing, here’s a rundown on how the final rule, which takes effect in March, compares to current regulations 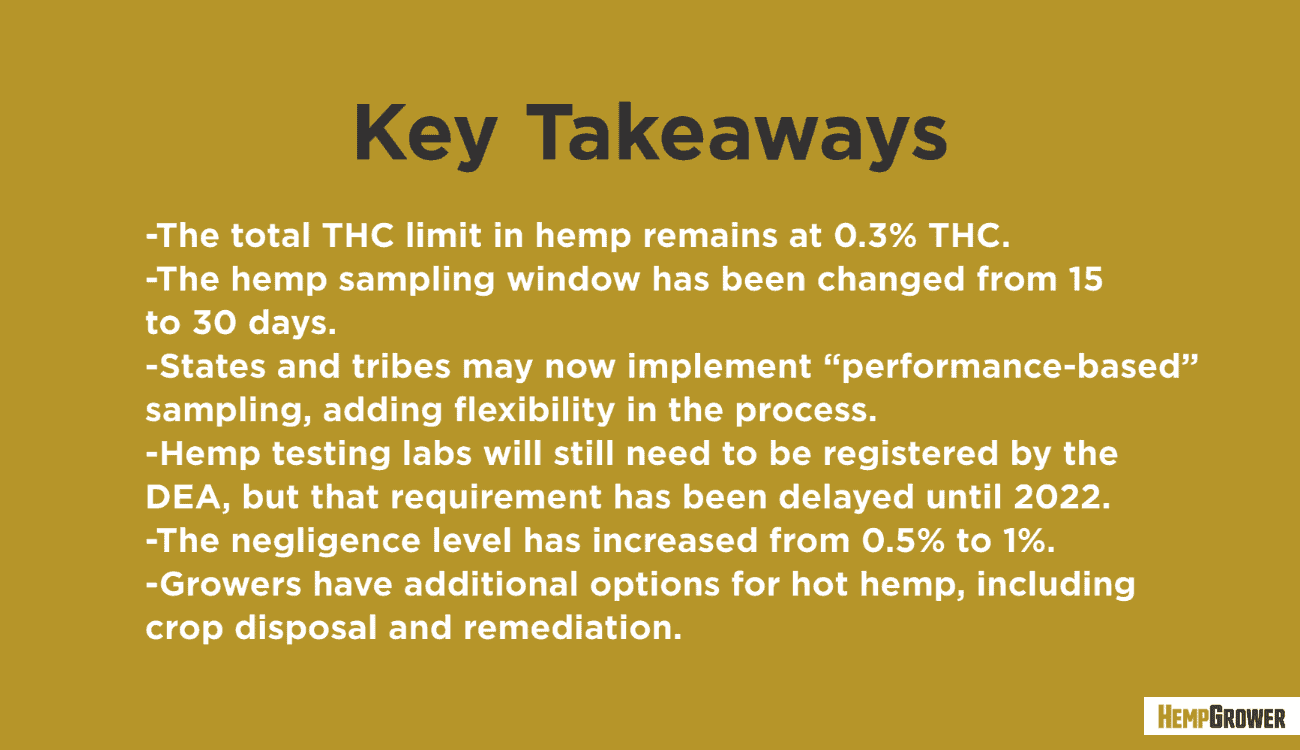 The final rule made several changes to sampling that should reduce burdens on both growers and regulators.

First, the rule increased the sampling window, which is currently 15 days. Samples for testing now need to be taken up to 30 days before a farmer plans to harvest, giving regulators more time to get into fields. Many stated in public comments that 15 days was far too little time to collect an appropriate amount of samples from each producer in the state.

The rule also slightly modified from where on the plant samples need to be taken. While the IFR required collecting a sample from the top third portion of the plant, the final rule now states samples should be taken “approximately five to eight inches from the ‘main stem’ (that includes the leaves and flowers), ‘terminal bud’ (that occurs at the end of a stem), or ‘central cola’ (cut stem that could develop into a bud) of the flowering top of the plant.”

“That will help reduce instances of hot crops,” Steel says. Stems and leaves typically contain lower levels of cannabinoids—and specific to this issue, of tetrahydrocannabinol (THC)—than the flowers.

However, Graff says this still requires sampling from primarily floral material despite comments on the IFR that requested switching to a whole-plant sampling approach.

The final rule dedicates a significant portion of its 300 pages to addressing and responding to the most highly requested comments, including those on sampling.

“Even though many commenters felt that whole plant sampling should be allowed, AMS is of the opinion that since THC [tetrahydrocannabinol] is concentrated in the flower material of the plant, the flower material is more appropriate to test than the entire plant,” the final rule states.

Perhaps most significantly, the final rule has changed sampling protocol from collecting a “representative sample of every lot [growers] plan to harvest” using specific methodology, according to the IFR, to allowing states and tribes to implement a more “performance-based” method.

The AMS says these performance-based sampling protocols may take into account:

“Flexibilities afforded to States and Indian Tribes developing their own hemp production plans will allow them to incorporate best practices, as those change and develop over time. For example, States and Indian Tribes can adapt field-walking patterns to various sized and shaped hemp grower operations,” the final rule states. “AMS believes that a national standard would be difficult to consistently apply given the various grower operations and that standard ‘zig-zag,’ or letters ‘M’ or ‘Z’ walk patterns may not be feasible for sample collection of micro-acreage producers, very large scale producers or those with polygonal hemp lots.”

States will need to include details of their performance-based sampling methods in their hemp plans, which the USDA must approve. (An updated guide on sampling has been published on the AMS website.)

While the final rule implemented generally positive sampling changes for the industry, THC testing will, for the most part, remain burdensome.

The final rule retains that hemp must remain below 0.3% total THC on a dry-weight basis. Total THC is defined as the sum of the delta-9 THC and tetrahydrocannabinolic acid (THCA). On its own, THCA does not produce psychoactive effects like delta-9 THC, but it can be converted to THC through decarboxylation, which is the process required for testing.

While increasing that limit was one of the most highly requested changes in public comments, the USDA was unable to do so, as that limit was written into law in the Agriculture Improvement Act of 2018 (the 2018 Farm Bill). It’s notable that total THC, however, was not written into the farm bill—that bill defines hemp only by delta-9-THC levels. In its final rule (as well as the IFR), the USDA interprets the language of the farm bill to mean that total THC must be tested.

However, legislation has been introduced in both Kentucky and at the federal level by Sen. Rand Paul to amend that limit to 1%, which would quell the total THC versus delta-9-THC debate.

“There’s still some work to be done, but [the USDA] acknowledged that by pushing off the DEA lab requirement until 2022, so they acknowledged they don’t necessarily have it right.” – Jeff Greene, co-founder, Florida Hemp Council

The final rule also retained “one of the most hated provisions,” Graff says—its requirement for labs testing hemp to be registered with the U.S. Drug Enforcement Administration (DEA).

“Although AMS received comments in opposition to this requirement, AMS is retaining the requirement in this final rule that any laboratory testing hemp for purposes of regulatory compliance must be registered with DEA to conduct chemical analysis of controlled substances… ,” the final rule states. “Registration is necessary because laboratories could potentially handle cannabis that tests above 0.3 percent THC on a dry weight basis, which is, by definition, marijuana and a Schedule 1 controlled substance.”

In 2020, the USDA announced the delay of some requirements outlined in the IFR, including the requirement for labs to be registered by the DEA. That delay has been further extended under the final rule until December 2022.

Jeff Greene, co-founder and director of business development of The Florida Hemp Council, sees that delay as a good sign—especially if the new Biden Administration chooses to reexamine and amend the final rule.

The final rule did make one positive change on the testing front. It raised the negligence threshold from 0.5% to 1%, which means if hemp tests above 0.3% but below 1%, it will not be considered a negligent violation (however, it will still need to be disposed of or remediated). Those with crops testing at or above 1% THC will receive a Notice of Violation from the USDA, which will include a corrective action plan that producers are required to follow by a certain date and report progress on to the USDA. Producers with more than three negligent violations within a five-year period will be ineligible to participate in the licensed hemp program for the next five years.

However, producers are only subject to a maximum of one negligent violation per year, even if their hemp from multiple lots tests up to 1% THC.

“I think it has taken a lot of the bite out of criminality,” Greene says about the increased negligence limit.

If hemp does test “hot” above the 0.3% THC limit, the final rule has given producers additional options for disposal beyond the total destruction written into the IFR.

States now have several options for more productive and less wasteful methods of disposal that can result in useful soil amendments. Those include:

Producers may also bury or burn their hot hemp. (The AMS implemented these additional options in early 2020, but they were not written into the IFR.)

The rule states producers can remediate their material by “removing and destroying flower material, while retaining stalk, stems, leaf material, and seeds.” Producers may also shred the entire plant to create a “biomass-like material” and then retest it for compliance.

Producers also no longer need to use a DEA-registered distributor or law enforcement to dispose of hot hemp.

“Through both forms of remediation, producers may be able to minimize losses, and in some cases produce a return on investment while ensuring that non-compliant material does not enter commerce,” the final rule states. (The AMS has more information about crop disposal and remediation on its website.)

Other Changes and a Potential for Future Amendments

The AMS also makes clear in the new regulations that the final rule only pertains to hemp cultivation. Any production that takes place afterward is under purview of the DEA and U.S. Food and Drug Administration (FDA).

“What happens after growth is not under the purview of the USDA,” Steel says.

“Overall, the final rule’s contents in some ways show progress and demonstrate the USDA has looked into the industry as part of its public comment process. In another way, the final rule remains stagnant.” – Garrett Graff, managing partner, Hoban Law Group

While these regulations are the so-called “final rule” on hemp, they may not be so final. Several industry sources say that President Joe Biden’s administration may call for a freeze on the rule, which is due to take effect March 22, and make amendments to it.

Ultimately, many say the final rule is a step in the right direction for the hemp industry. Still, improvements can be made.

Greene predicts the USDA will learn from how states implement their performance-based sampling procedures and eventually standardize the most successful programs on a federal level.

“The DEA lab requirement and how [hemp is sampled] are two things that will be finalized during the Biden Administration,” Greene says, adding that Sen. Rand Paul’s bill to increase the THC limit to 1% would be the trifecta of amendments for the industry. “If we hit those pitches out of the park, then we win the game.”