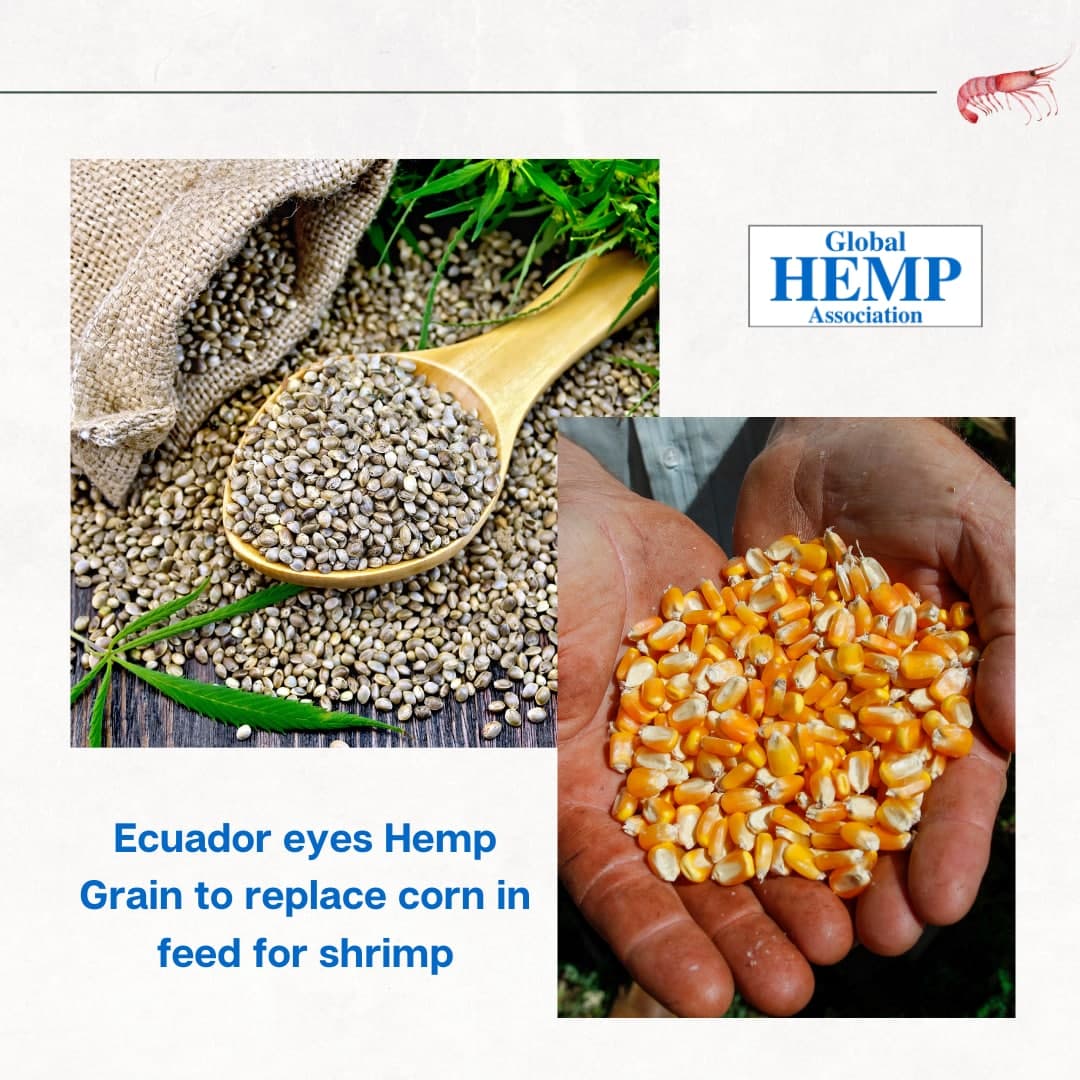 One of the latest Latin American countries to legalize low-THC cannabis, Ecuador, is looking to hemp grain as a cheaper alternative to corn for its large shrimp industry.

Ecuador is South America’s leader in shrimp production and a big player on the world stage, but corn prices are high and fewer farmers are willing to plant it, preferring instead more profitable commodities like cocoa, according to a March report from the U.S. Department of Agriculture Foreign Agricultural Service.

In 2019, Ecuador became the top shrimp exporter, with 56% of exports going to China, according to to the Food and Agriculture Organization of the United Nations. Ecuador produced 600,000 tons of shrimp in 2019, and the industry was on the rise heading into 2020, until COVID-19 halted production.

With corn prices high and Ecuador’s wheat industry entirely dependent on imports, “animal-feed producers are increasingly experimenting with and using other corn alternatives such as rice byproducts that are available domestically and imported distillers’ dried grains with solubles,” according to the March Foreign Agricultural Service report.

The U.S. and other countries see CBD as the biggest moneymaker now. But Ecuador sees industrial hemp as having a better economic benefit in the long run, said Andrés Luque, who’s in charge of cannabis regulation at Ecuador’s Ministry of Agriculture.

“Our long-term vision, as the Ministry of Agriculture, is to develop the industrial hemp industry,” Luque said in an interview.

Ecuador legalized cannabis for medical use and low-THC hemp late last year, and 0fficials are drafting the regulations, which are expected to be in place in the coming weeks.

“That shows that we’re learning in this industry that there is so much more to the plant … and how it can fit into all of these different countries and all these different industries around the world,” said Eric Singular, an industrial hemp specialist at the Denver-based consulting firm Gateway Proven Strategies.

Like other equatorial countries, Ecuador is faced with the challenge of finding industrial hemp cultivars that can thrive in a year-long 12-hour daylight cycle. Most of the industrial hemp varieties planted around the world today were bred in the northern hemisphere and don’t perform well in the tropics.

Colombia, which legalized medical cannabis and hemp with less than 1% THC four years ago, has been working since then to breed such a cultivar, and there are companies that say they’re getting close. Ecuador will be relying on those seeds.

It’s unclear how beneficial hemp grain would be to shrimp, but Singular said he’s heard from people in Colorado who have used hemp grain to feed livestock and “the results are apparent pretty quickly.”

“What they’re seeing is that animals eat less of it, but gain weight either at the same rate as consuming other grains, or even gaining more weight,” Singular said. “And that’s due to the nature of hemp grain being so high in protein and so nutrient dense.”

Luque said the land the country has used to cultivate sugarcane is flat and extensive and “can be transformed quite well for industrial hemp.”

“Almost no one consumes sugar anymore, so the prices are bad,” Luque said.

Ecuador’s focus on grain for shrimp doesn’t mean the country is ignoring the CBD craze in the U.S. But Luque said there’s a lot of market risk – and a lot of competition – in CBD, and the government would rather leave that area to private investors.

“We’ve suffered through moments when public money was used to finance private projects that promised to be the next shrimp industry,” he said, recalling how about 20 years ago, the government publicly funded a project to farm sweet lobster. Nothing came of it.

“We believe that public funds shouldn’t finance these projects – CBD most of all,” Luque said. The day Ecuador has a cultivar that can survive a 12-hour daylight cycle and is good for fiber and grain, then the government will consider subsidizing its hemp industry.

“Sincerely, for us at the ministry, industrial hemp is the horse we’re betting on long-term,” he said.

Ivan Moreno can be reached at ivanm@hempindustrydaily.com