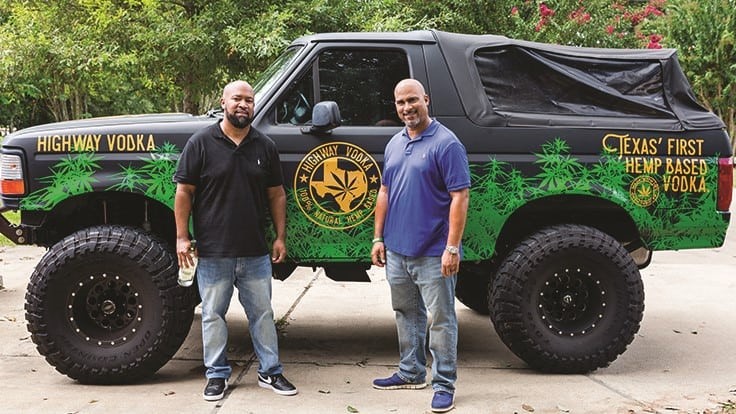 Cannabidiol (CBD), the star compound of hemp, may be known for its relaxing properties, but one company has uncovered how to make a relaxing—and even intoxicating—product using an entirely different portion of the plant: hempseed.

Highway Vodka, a company founded by lifelong friends Ben Williams and Wendell Robbins III, had been seven years in the making when it launched in 2019.

Williams began distilling vodka as a hobby. But when he visited a friend in California who owned a cannabis dispensary (and is a fellow vodka-distilling enthusiast), he met others who were distilling their vodka with cannabis. It inspired him to try the same with hemp.

Now, the Houston-based company has become the first Black-owned distillery in the city, according to Highway Vodka, and is expanding its distribution beyond Texas to include Georgia, California and Florida.

“It’s not about hemp flavor, and it’s not about CBD, to be honest,” Williams says. “It was really about what the plant does for my particular process.” 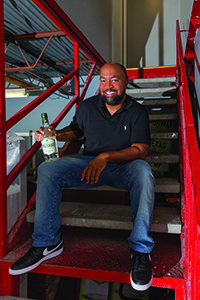 When Williams began experimenting with different hemp vodka formulations, the crop was not yet legal in the U.S., so Williams began sourcing from Canada. Eventually, federal farm bills in 2014 and 2018 opened the legal landscape for hemp, allowing Williams to expand his experimentation with hemp grown in the U.S.

He tried different parts of the plant as well as different forms of the grain, from full raw hempseed to roasted grains.

“I’ve played with every part of the plant I could get my hands on,” Williams says. “The thing that’s right under your nose and most readily available turned out to be what I needed: hulled hempseed.”

Williams spent years honing the formula. Then, it all clicked.

“One day I was just being lazy and dumped everything into the still [the apparatus used to distill vodka]. Right off the rip at a super high proof, it was just better. It had a better smell, feel,” Williams says. “We immediately started proofing it down, making cuts and filtering it. … It was literally just the best stuff we had ever made.”

That formulation consisted of corn, water and hulled hempseed. From that day, Williams and Robbins continued honing that formulation, trying out distilling it a wide number of times and settling on six for the “purest, sweetest” taste, Williams says.

Williams, who owned his a small bar and also opened a restaurant called Lucille’s 1913 with his brother, Chris, began taking the vodka to his establishments to let people sample it.

“It was just consistently winning,” Williams says. “I was like, ‘Let’s just try to make a go at it.’”

Vodka is typically made with fermented grains that are then put through a distilling process. This can include corn, sorghum, rye, rice or wheat.

But hemp grain is unique in that it has a high fat content. And while the vodka doesn’t necessarily have the taste of hemp, Williams says the additional seed does give it a different mouthfeel.

“At distilling six times, after it goes through the process of going through the still, you’ll notice it has a viscosity difference. I don’t think it’s thick or creamy—it just has a little more body than your typical vodka,” Williams says. “What we’ve found is that oil and those fats coat your palate and smooth [the taste of the vodka] out, so there’s no burn. It makes it easy to drink neat and straight up. It also holds the sweetness from the corn on your palate.”

The two also found that the hemp actually produces higher yields of alcohol. While yeast nutrients, which are used to produce more alcohol, can produce an unwanted flavor, Williams says, hemp did not.

“I found out different proteins in hemp act as a superfuel for my yeast,” Williams says. 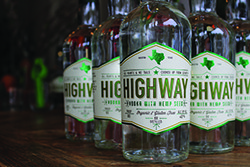 As Highway Hemp Vodka gains popularity and expands its distribution, Williams he’s looking to expand his sourcing network as well.

While the two partners were dialing in their formula, Williams was searching for “the fattest hempseed I could find.” He settled on a supplier in Minnesota and is currently sourcing anywhere between 550 to 800 pounds of seed a week.

Williams says he’s currently in the process of finding a Texas-based source for the seed. But it’s been a challenge, as many growers in Texas kicked off 2020—the state’s first year of hemp production—with fiber varieties.

Still, his search will continue as Highway Hemp Vodka grows. In addition to retailers selling the vodka in several states, it is available in more areas via online ordering at reservebar.com.

The company is also working on putting out new products in the upcoming year, including honing a formula for hemp whiskey.

“We have no choice but to make everything,” Williams says. “We’re just having fun with it.”