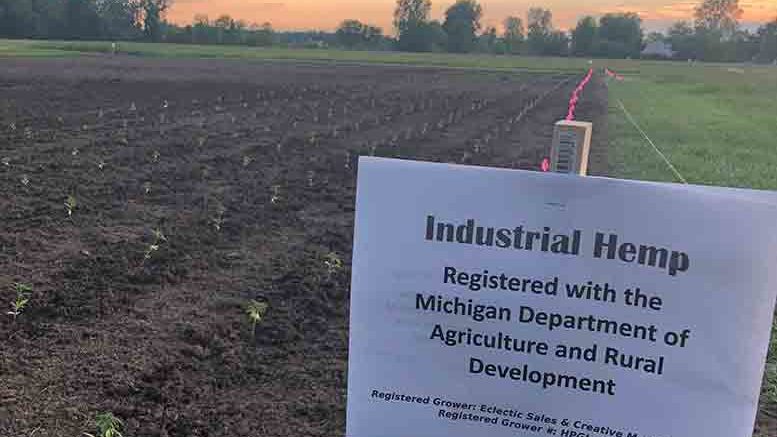 The U.S. state of Michigan can be a hemp powerhouse if the sector can attract sufficient investment, the state’s hemp trade association says.

With a wide range of Michigan manufacturers interested in hemp’s potential, more processing is needed to advance the industry to the next level, said Dave Crabill, co-founder and communications director at the association, iHemp Michigan.

“We like to say hemp can be used to make a thousand things,” Crabill said. “And that’s absolutely true. But right now in Michigan, it’s only being used to make a handful of things. What Michigan needs more than anything right now is investment in processing.”

‘Work to be done’

The U.S. Department of Agriculture approved Michigan’s state program last October, ushering in fully legalized hemp production for the first time since World War II. iHemp Michigan hailed the federal decision, but has noted there is much work to be done to cement industrial hemp’s position in Michigan’s agriculture and manufacturing landscape.

“The next three to five years could decide our future. If we move fast, attract investment and engage our business community, Michigan could be a national leader in a hemp-based economy,” Crabill said.

Stakeholders can get an extensive look at hemp opportunities in Michigan during this year’s second annual Midwest Industrial Hemp Expo, an online event set for Jan. 22-23, hosted by iHemp Michigan.

With the CBD market now largely saturated and states around the nation earning federal approval for state hemp programs, speakers at the Expo’s conference will talk about how the hemp community is working to solve the complex question of how to more broadly marry its farming community to its manufacturing sector, Crabill said. The program also puts a strong emphasis on sustainability this year.

Michigan hemp fields jumped dramatically in 2020, with 553 registered growers representing 13,225 outdoor acres (~5,351 hectares) and 11 million sq. ft. of indoor hemp production, according to state officials. While all those licensees may not have grown hemp in 2020, the figures are up from roughly 450 farmers who grew hemp on only 3,678 acres (~1,500 hectares) outdoors, and in 400,000 sq. ft. of space indoors during the 2019 hemp season, according to a state hemp report issued in June of last year.

As in most U.S. states, the hemp sector in Michigan has been dominated by flower production for CBD since starting up in 2019. But a third of those who planted for flowers indicated they also harvested for fiber and grain in 2019, when hemp was planted in 58 of the state’s 83 counties. That indicates widespread experimentation with hemp across the state.

Michigan’s wide range of crops makes it second in diversity only to California’s production among all U.S. states. Much of the agriculture profit in the state comes from inedible products, such as corn grown for grain, Christmas trees and floral nursery products. Michigan is a significant producer of cherries, potatoes, apples and blueberries. According to the Michigan Department of Agriculture, farming contributes $71.3 billion annually to the state economy. Greenhouse and nursery products (flowers and shrubbery) generate 14% of Michigan’s total agricultural revenues. Corn for grain produces about 11% of the state’s agricultural revenue. Other common Michigan field crops are soybeans, sugar beets, wheat, and hay.

As for hemp: “Michigan farmers have proven they can grow it,” said Crabill.

Speakers at next week’s Expo include state and federal officials, university experts, and nationally-recognized leaders in subjects ranging from brokerage to marketing. A business roundtable will include leaders from Amway, Carhartt, Mohawk Fine Papers and others, who will discuss the potential and challenges facing companies looking at how to incorporate hemp in commercial products.

“The conference will take a hard look at what’s ahead, and how everyone in the hemp community can capitalize on near and long-term opportunities,” Crabill said.