The Case for Bioplastics – from Industrial Hemp

The amount of plastic thrown away daily is staggering. In the US alone we toss 110,000 pounds of plastic into trash bins, alongside the road, or into water – daily. Let me repeat that – 110,000 pounds every day – 365 days a year. None of this plastic EVER goes away. It becomes nanoparticles and studies have found 77% of humans have plastic in their blood systems. We don’t know yet what effect that plastic has on human health.

Plastic is problematic because of its high environmental impact during production and after use. It’s made from a non-renewable resource, oil. And the process of breaking molecular bonds in oil to create the strong bonds that make plastic so useful is energy intensive. The very reason we like plastic, its strength, is also the reason why it’s such a problem. It’s those strong molecular bonds that keep it from ever really decomposing.

That strength was seen as a benefit in the 1940s when Henry Ford made his “plastic car.” 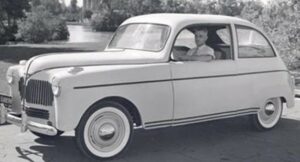 Henry Ford’s “plastic” car made from hemp and other agricultural products. A plant-based car. Image: Wikipedia

Henry Ford was a friend of farmers, who were devastated economically by the Great Depression. He was sure cars would continue gaining in popularity and if he could make them out of farm products so much the better.

Now, although Henry Ford did make a prototype plastic car – it wasn’t exactly made entirely out of hemp. In fact, it was only 10% hemp according to a New York Times article from August 14, 1941:

“One of the plastics developed by Ford chemists is a material composed of 70% cellulose fiber and 30% resin binder. The cellulose fiber consists of 50% southern slash pine fiber, 30% straw, 10% hemp, and 10 % ramie.” (http://theangryhistorian.blogspot.com/2010/10/hemp-car-myth-busted.html)

The hemp in that mix made the car extremely durable. Henry Ford would go around with an axe banging on the trunk of his car to show how the axe would just bounce off without leaving a dent. But Ford was ahead of his time.

The end of World War II was also the end of Ford’s plastic car.

Bioplastics Are Again Making Inroads into the Plastic Industry

Bioplastic can be made from any type of biomass. Vegetable oils, corn starch, sawdust, and even food waste have all been tested for bioplastic use. Hemp is considered the best choice because it has up to 70% cellulose in the stalks. It’s also economically feasible because it grows fast, uses less water than other bioplastic feedstocks, doesn’t need much fertilizer, and no pesticides.

In the US the major sources of bioplastic feedstock are corn and soybeans. Why? Because farmers are subsidized for growing those two crops. And that crop subsidy makes them a cheaper alternative to hemp. Businesses have tended to look only at the cost of bioplastic raw material to them. Cost has been the predominant competitive point between hemp and corn or soy.

The carbon footprint of soy and corn is huge. Corn takes 22-30 inches of water a year, soybeans take 15-25+ inches of water per season. Corn and soybeans grown conventionally – which is 95%+ – are treated with herbicides, fungicides, and pesticides. Both crops, in monocropping systems, are putting a strain on ecosystems and soil health. And conventional farming, with tillage, isn’t sequestering any carbon in the soil.

On the other hand, hemp needs only 12-15 inches of water in a growing season. It needs most of that when the plants are seedlings. Hemp is drought tolerant after it becomes established, but irrigation does increase biomass yield. Hemp is usually grown without pesticides and minimal nitrogen fertilizer. When hemp is grown using regenerative farming practices carbon is sequestered in the plant and the soil, leading to a carbon negative raw material.

Hemp is a fast-growing crop, uses less fertilizer inputs, less water, and develops a canopy for weed control. So…

Why isn’t it the #1 bioplastic? Besides competing with subsidized corn and soy, the infrastructure for hemp bioplastics is inadequate. Other bioplastic materials have had years to develop robust supply chains.

Bioplastics may not be able to outcompete plastics for all purposes. Hemp is strong; perfect for composites for car panels, plastic serving utensils, and even plastic bags. But the characteristics that make it good for one use are problematic for other uses, such as medical packaging used for blood transfusions.

But the 22 billion plastic bottles that are thrown away very year in the US could all be hemp bioplastic. If manufacturers make those bottles out of 100% hemp (composite and resin), then they’re 100% compostable. A plastic bottle never decomposes while hemp bioplastic can degrade within 3-6 months. And hemp has no noxious fumes or chemicals leaching into water systems.

Large manufacturers who have used steel and fiberglass in the past are looking at hemp bioplastics for their products. Hemp is stronger than steel and lighter than fiberglass. Creating cars from hemp is cheaper and the car is lighter. A lighter, stronger car is also more fuel efficient.

Hemp bioplastics are what is referred to as a “drop-in” bioplastic. Which means the specs of processed hemp match those of oil derived plastics for many uses and manufacturing processes. And using hemp instead of fuel-based plastics helps companies meet climate targets.

Every product is made with particles and binders. In many hemp bioplastic products, the binders are synthetic polymers, which interferes with recycling and decomposition. What if the resin was also a hemp product?

Hemp based polymers are made from the plant’s cellulose. The Hemp Plastic Company produces Hemp PLA (polylactic acid) and polypropylene for use in injection molding. They replace oil-based polymers and are commercially compostable.

The future of hemp is in both composites and polymers. Until products are made with both the bioplastic and binder as biodegradable products, we’ll continue having our plastic problem.

It appears industry is turning the corner on plastics. Many countries are banning single-use plastics and bioplastics are supported by numerous governmental agencies. Hemp supporters are actively lobbying congress on the subsidy issue of corn and soy to level the playing field for hemp as the best source for bioplastics.

This is a controversial step because corn and soy have such a long history in American agriculture. But BMW and other car manufacturers are already using hemp in panels, doors, and other car parts. They may be doing it because it’s less expensive to produce a car with bioplastics. But the auto industry has come full circle and Henry Ford’s plastic car is no longer a prototype. “Plastic” cars are available in auto showrooms around the world.

It’s just a matter of time until the industrial hemp supply chain catches up with science. Hemp bioplastics usher in the era of a circular economy that reduces waste and pollution. Consumers are already demanding environmentally friendly solutions for everyday objects. Is the industrial hemp industry ready for large-scale systemic change? In 1941 Henry Ford said about his car made from agricultural products:

“It will be a car of darn sight better design in every form. And don’t forget the motor car business is just one of the industries that can find new uses for plastics, made from what’s grown in the land!” (New York Times, 14 August 1941)

To meet hemp bioplastic experts and entrepreneurs visit the Global Hemp Association website. Become a member and listen to hemp experts discuss the challenges and opportunities in bioplastics.